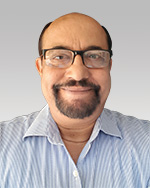 Farhat Basir Khan is a distinguished academician, a communication strategist, a media practitioner and an innovator with several new media techniques and formats to his credit. He is the seniormost faculty member of Asia’s premiere mass communication institute, the AJK Mass Communication Research Centre (AJK MCRC), New Delhi, and has served on several prestigious positions in AJK MCRC including the Maulana Abul Kalam Azad Chair Professor and Professor of Media and Communication, and outside as Founder Director and Professor of the Academy for Photographic Excellence. In addition to leading several productions, researches and advocacy campaigns, he is a true champion of a Digital India. He has also made remarkable efforts in capacity building, media and digital literacy and sensitization.

Moreover, Professor Khan champions the use of communication for development and is known to have curated several exhibitions on mental health, votography for sensitization of youth for democratic participation and preventing violence against women, besides several others. In the past, he has worked for the multistakeholder advisory group of India—Internet Governance initiative—where he supported to expand the national and cyber security dialogue to include the marginalized communities, minorities and underrepresented stakeholder groups. Also, he has the unique distinction of producing the 50-year commemorative audiovisual for UNICEF India, as well as for World Health Organization, which was part of their main celebration events. Currently, he also serves on the board of editors of the Journal of Scientific Temper of the Council of Scientific & Industrial Research (CSIR), Department of Science & Technology, Government of India.

The Game of Votes