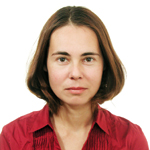 Ekaterina Stepanova (Russia) leads an Armed Conflicts and Conflict Management Project at Stockholm International Peace Research Institute (SIPRI). She has been a Senior Research Associate on nontraditional security threats at Center for International Security, Moscow Institute of World Economy and International Relations (IMEMO) since 2001. She serves on the editorial board of the journals Terrorism and Political Violence (St Andrews University), and Security Index (CREP, Geneva). Previously, she has worked as a researcher on armed conflict and terrorism at SIPRI (2003), and a researcher at the Moscow Center of the Carnegie Endowment for International Peace (1994–2000). She has held several Russian research fellowships, was twice adjudged McArthur Research Fellow (2000 and 2003), and a McArthur NGO Fellow at King’s College, University of London (1998). She is the author of several monographs, including Terrorism in Asymmetrical Conflict: Ideological and Structural Aspects (2008), Anti-Terrorism and Peace-Building During and After Conflict (2003), and Civil–Military Relations In Operations Other Than War (2001). Her book, The Role of Illicit Drug Business in the Political Economy of Conflicts and Terrorism (2005), won the gold medal from the Russian Academy of Sciences.