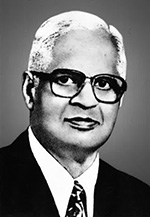 Durganand Sinha (Born: 23 September 1922; Died: 23 March 1998) did his B.A. and M.A. in Philosophy (with specialization in Psychology) from Patna University. Subsequently, he went to Cambridge University where he was awarded the M.Sc. degree. On his return to India in 1949, Professor Sinha joined as the faculty of Psychology at Patna University. His research article ‘Behavior in a catastrophic situation: A psychological study of reports and rumors’ published in the British Journal of Psychology showed his scientific creativity and responsiveness to the problems of his immediate surroundings. He left Patna in 1958 and joined the newly established Indian Institute of Technology, Kharagpur.

In a career spanning half a century, Professor Sinha made significant contributions as a researcher in diverse areas. It encompassed the role of socio-cultural factors in perception and cognition; changes in the Indian family and the implications for the socialization process; larger applied social psychological issues such as motivation and rural development, deprivation and poverty; and social change. His books (listed in the section ‘Complete Works of Durganand Sinha’ in this volume) have left his name permanently in the field of psychology of social sciences. In India, he was a central figure of the psychological profession. He served as the President of the Indian Psychological Association, the Indian Academy of Applied Psychology and Psychology Section of the Indian Science Congress.
Psychology for India