Dev Nath Pathak is currently a senior assistant professor at South Asian University, New Delhi (India). He teaches sociology there. He has a doctorate in sociology from Jawaharlal Nehru University, New Delhi. His research interests consist broadly of cultural performances, art, music and popular cinema in the region of South Asia. In the past, he has taught at the Department of Sociology of Jamia Millia Islamia, New Delhi, and Hindu College and Kamala Nehru College of University of Delhi, and also at the Centre for Culture, Media and Governance. He has contributed articles to various journals and chapters in edited books. Some of his recent publications include Culture and Politics in South Asia: Performative Communication (2017); Another South Asia! (2017) and Intersections of Art, Sociology and Art History (2016). He is also a review editor with the journal Society and Culture in South Asia. Some of his publications are available at academia.edu. The thematic range of his writings includes sociology in South Asia, youth subjectivities, anomalies of education, politics of cinema, performance and visual arts. He was a Charles Wallace Fellow at Queen’s University, Belfast, United Kingdom, in 2015.
Modern South Asian Thinkers 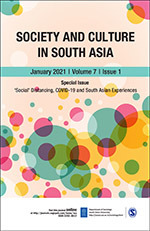