David J. Hickson is Emeritus Professor of International Management and Organization at Bradford School of Management, England. His prin­cipal research interests are how societal culture affects managerial decision making in different nations and what influences the success of major decisions. His previous research has included processes of mana­gerial decision making, power in organizations, and bureaucratization. He was founding Editor-in-Chief of the international research journal Organization Studies; a founder of the European research association in his field, the European Group for Organizational Studies (EGOS); and a founding member of the British Academy of Management. He has held appointments in university business schools and research institutes in Canada, the United States, and the Netherlands, has an Honorary Ph.D. from the University of Umea in Sweden, and has lectured widely around the world. He has published numerous research journal papers and book chapters and is author or editor of eight books, most recently Management in Western Europe (1993, DeGruyter) and Management Worldwide: Distinctive Styles Amid Globalization ( enhanced ed, 2001, Penguin Books, with Derek S. Pugh). Prior to becoming an academic, David Hickson worked in financial administration and qualified profes­sionally as a chartered secretary and in personnel management.
Writers on Organizations 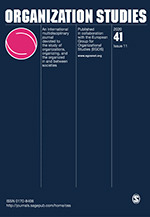