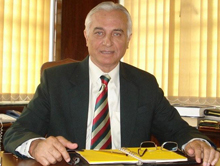 A soldier-scholar of the Indian army, Lt. General Arjun Ray has wide-ranging experience in war, conflict management and social transformation.

Lt General Ray served as India’s Deputy Military Advisor in London. In his last assignment, he commanded the newly raised 14 Corps in Ladakh. As part of Operation Sadbhavana (Goodwill), he set up 13 Sadbhavana schools, 11 women’s empowerment centres and 60 adult education centres for non-literate women along the Line of Control in Jammu and Kashmir.

In recognition of his services in nation-building, he was awarded the Param Vishisht Seva Medal, the highest award in the armed forces for distinguished service. His success story in change leadership has been selected as a case study for business and management schools in India.

In his second calling—international school education—he has set up three International Baccalaureate Schools, the Leadership School, and the world’s first Equal Opportunity School for children living below the poverty line. IB World has recently acclaimed the general as one of the six IB World School Leaders on rethinking education, especially by making high-quality education affordable to the poor.

The author’s first book, Kashmir Diary: The Psychology of Militancy (1997), is a purple primer in understanding the mind and motivation behind political violence.