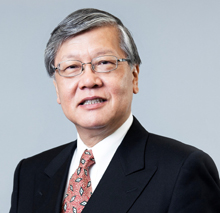 Andrew Sheng, a chartered accountant (FCA, 1972) by profession, is currently the Chief Adviser to the China Banking Regulatory Commission. In addition to this position, he holds several academic, statutory and corporate sector appointments in Malaysia, India and Qatar: Adjunct Professor at the Graduate School of Economics and Management, Tsinghua University, Beijing; Pro-Chancellor of the Universiti Tun Abdul Razak, Malaysia; Adjunct Professor and Third Holder of the Tun Ismail Ali Chair at the Faculty of Economics & Administration, University of Malaya; member of the Malaysian National Economic Advisory Council (NEAC), the Governing Council of the International Centre for Education in Islamic Finance (INCEIF), the Advisory Council of the Iskandar Regional Development Authority and the International Advisory Panel of the Labuan Offshore Financial Services Authority (LOFSA); Director of Khazanah Nasional; Board Member of Sime Darby Berhad, International Advisory Council Member of the China Investment Corporation; Board Member of the Qatar Financial Centre Regulatory Authority, Board Member of the Advisory Council of the National Institute of Securities Market, India (NISM) and member of the Advisory Board of the Emerging markets Forum. Sheng has been Co-Chair of the OECD-ADBI Roundtable Conference on Capital Market Reform in Asia since 2005.

A central banker by training, he was an Assistant Governor and Chief Economist of Bank and Insurance Regulations at Bank Negara Malaysia. Between 1989 and 1993, he was Senior Manager, Financial Sector Development Department, World Bank. In Hong Kong, China, he was the Deputy Chief Executive responsible for the Reserves Management and External Affairs Departments of the Hong Kong Monetary Authority, followed by seven years as the Chairman of the Securities and Futures Commission of Hong Kong, China from October 1998 until his retirement in September 2005. His span of economic and financial experience are captured in his book From Asian to Global Financial Crisis, published by the Cambridge University Press in 2009.