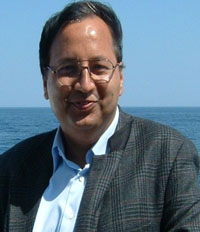 Ananda Mohan Bhattarai is a judge in the Court of Appeal in Nepal. He was associated with the National Judicial Academy, Nepal since its establishment in 2004, where he worked first as a core faculty and later as an extended faculty. He has worked in the Nepal judiciary for more than 27 years.

He holds an L.L.M. and J.S.D. from the National Law School of India, Bangalore. He was a SPURS/Hubert Humphrey Fellow at the Massachusetts Institute of Technology, USA (2002–03) and Georg Forster Fellow at Max Planck Institute of International Law and Comparative Public Law, Heidelberg, Germany (2005–06 and 2008). Apart from numerous research articles, he has published two books: Displacement and Rehabilitation in Nepal (2001) and Communities, Forests and Laws of Nepal (2005, co-authored with Dilraj Khanal).