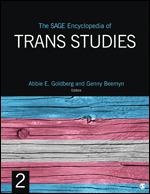 Share
Other Titles in:
Developmental Psychology (General) | Gender & Sexuality Studies (General) | LGBT Issues
June 2021 | 1 040 pages | SAGE Publications, Inc
Download flyer
Transgender studies, broadly defined, has become increasingly prominent as a field of study over the past several decades, particularly in the last ten years. The experiences and rights of trans people have also increasingly become the subject of news coverage, such as the ability of trans people to access restrooms, their participation in the military, the issuing of driver’s licenses that allow a third gender option, the growing visibility of nonbinary trans teens, the denial of gender-affirming health care to trans youth, and the media’s misgendering of trans actors.

With more and more trans people being open about their gender identities, doctors, nurses, psychologists, social workers, counselors, educators, higher education administrators, student affairs personnel, and others are increasingly working with trans individuals who are out. But many professionals have little formal training or awareness of the life experiences and needs of the trans population. This can seriously interfere with open communications between trans people and service providers and can negatively impact trans people’s health outcomes and well-being, as well as interfere with their educational and career success and advancement. Having an authoritative, academic resource like The SAGE Encyclopedia of Trans Studies can go a long way toward correcting misconceptions and providing information that is otherwise not readily available.