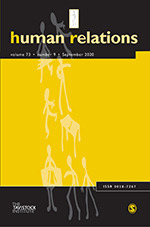 Human Relations has had a long tradition of bringing social science disciplines together in order to understand the character and complexity of human problems. We publish incisive investigations from an international network of leading scholars in management, psychology, sociology, politics, anthropology and economics.

This note states briefly the mission of the journal. It then gives detail and elaboration.

Human Relations addresses the social relations in and around work – across the levels of immediate personal relationships, organizations and their processes, and wider political and economic systems. It is international in its scope. The journal is grounded in critical social science that challenges orthodoxies and questions current organizational structures and practices. It promotes interdisciplinarity through studies that draw on more than one discipline or that engage critically across disciplinary traditions. It deploys any social science method used in a rigorous manner. It promotes studies that draw out the practical implication of their results in a manner consistent with critical engagement with practice as opposed to advice to particular actors or groups.
Process and background

The mission statement has been produced as part of the journal's self-reflection about its aims and purpose, inspired in part by its 70th anniversary in 2017. The first issue in 1947 declared the focus to be 'community problems' and 'interpersonal and inter-group tensions', together with studies developing theory relevant to these topics. The subsequent evolution of the journal is discussed in reflections on its history by Editor-in-Chief Professor Paul Edwards (available here). The present notes are the latest iteration (April 2016). A central part of the evolution was the tightening of the focus to work, the workplace, and linkages between this sphere and other aspects of society. The phrase 'the social relations in and around work' was developed in 2006 to summarize the focus. This remains the key interest.

The notes have been prepared after debate in the editorial team and discussion with the Editorial Board, our publishers, and the journal's Editorial Management Committee. This last body oversees the strategy of the journal, with membership comprising representatives of the Tavistock Institute (which co-founded the journal in 1947 and currently owns it) and the publishers, together with an independent Chair, the Editor-in-Chief and the Managing Editor. It is none the less impossible to define exactly the identity of a journal in a way that everyone would accept. Nor is it possible to specify a precise boundary between the journal and the many journals that address work, employment, and organization studies. The features highlighted here are thus indicative rather than absolute.

The journal retains its specific focus on 'the social relations in and around work'. The boundaries of 'work' have been extended massively in the past 20 years to embrace voluntary work, work in the home, the 'informal economy' and many other types of economic activity. We make no definitive statement as to what constitutes work. But we focus on social relationships around the production of goods and services in the private, public, and not-for-profit sectors; these relationships generally occur within organizations with hierarchies of power and authority. This focus would include, for example, voluntary work where it occurs within an imperatively co-ordinated organization but would generally exclude hobbies or activities in voluntary associations such as sports clubs. We include relationships with non-human 'actants' such as technologies.

The journal thus addresses all three levels of the 'micro' (immediate relationships between people), the 'meso' (organizations and their rules, processes and structures) and the 'macro' (the wider economy and society, which embraces the global economy and the systemic nature of capitalism and other modes of production). We generally exclude analyses that are wholly or mainly about the last level, for example, the development of a global production system or educational systems. We also tend to exclude accounts of organization as an overall social process, as distinct from an analysis of the linkages between such a process and relationships in the sphere of work.

We address in particular linkages between work and the wider political, social and economic context in which work is embedded, for example, relationships between paid work and the family and the links between work and equality and inequality. 'Social relations' thus mean more than direct relationships between people. They include the interplay between 'structure' and 'action' and the ways in which direct social relationships produce, reproduce and shape influences that are part of the structure of a situation. The environment of an organization, for example, is not an asocial thing but is itself socially shaped, and its influences are also socially defined. We aim to sustain analyses that build on such perspectives.

The journal welcomes contributions from all social science disciplines. We are in particular an interdisciplinary social science journal, sitting between generalist journals in such fields as management studies and those with a specific disciplinary focus. The journal is grounded in 'critical social science' in a broad sense. It is not limited to Critical Theory or Critical Management Studies, for example, but takes 'critical' to embrace any approach that challenges orthodoxies, aims to understand the processes generating things that are taken for granted and the reasons why they are taken for granted or poses questions about current ways in which organizations are structured and managed.

The journal aims to contribute to the understanding of the contemporary world of work by making linkages across disciplines, while recognizing the difficulty of this task. In the first issue, the strapline 'towards the integration of the social sciences' was adopted. This strapline was removed in the 1990s on the grounds that integration was hard to define and that progress towards it even harder to demonstrate, to say nothing of arguments that social science may need to develop distinctive sub-fields and specialisms. While recognizing that the initial ambition may have been grand and even naive, we assert the value of disciplines speaking to each other and of drawing on different disciplines to address substantive issues in the world of work.

The journal's approach to practice reflects the intersection of two things: the commitment to critically informed scholarship; and the journal's long tradition, linked with its roots in the Tavistock Institute, of a concern with improving working lives and even with emancipation. The essence of the idea was captured by one of the journal's, and institute's, founding figures, Elliott Jaques. He led the famous Glacier research project, which began as a piece of scientific inquiry. After the funded research ended, he was hired by the firm as a consultant. Reflecting on his approach (in issue 4, 1964, of the journal) he stressed that his method was not to offer advice to do a particular thing, but rather make comments such as: 'the following factors may help to resolve this issue' or 'there seems to be an inconsistency between current proposals and previous decisions'. We thus expect papers, where this is appropriate, to reflect on the implications for practice of their results. Discussion of the ethical and other issues of how research can engage with practice is also a feature of the journal. Specific recommendations as to what a particular actor or group might do are generally outside the journal's remit.

The journal welcomes contributions using any social science method, as long as they apply the method rigorously in line with best practice in that field. In line with our focus on actual social relationships in the world of work, we do not publish work based wholly or mainly on lab experiments, or drawing mainly on student samples, but will consider these research designs in concert with field data. We appreciate the power of field-based experiments/quasi-experiments with employees that combine the potential for strong inference with ecological validity not often found in the lab.

In relation to survey-based papers we endorse the movement away from single-respondent and cross-section designs towards multi-level and/or longitudinal studies. Cross-section designs may, however, be entirely appropriate in circumstances including: the novelty of the research in terms of topic or empirical location; limitations on research access; and evidence that allows causal inferences to be sustained. Papers using all kinds of qualitative methods are encouraged. They are expected to offer appropriate kinds of generalization, for example, by locating a case study within extant research and discussing the reasons why the case was as it was.

The journal's remit is not centrally research methods as such. Critical analyses of research methodology in the broad sense of the epistemology of research and the politics of the research process are encouraged. Narrower papers developing or validating research instruments will not generally fit our remit.

The journal has an international focus. It welcomes studies of and contributions from any region of the world.

Click here to see our data requirements for articles.

Human Relations is a member of the Committee on Publication Ethics (COPE) and follows the COPE Code of Conduct and Best Practice Guidelines for journal editors.

Please do read our guidance How to prepare and submit an article and do not hesitate to contact the Editorial Office at humanrelationsjournal@tavinstitute.org if you have any queries or problems with the submission process – we would be only too pleased to help!

Aim
Human Relations is an international peer reviewed journal, which publishes the highest quality original research to advance our understanding of social relationships at and around work through theoretical development and empirical investigation.

Scope
Human Relations seeks high quality research papers that extend our knowledge of social relationships at work and organizational forms, practices and processes that affect the nature, structure and conditions of work and work organizations.

Human Relations welcomes manuscripts that seek to cross disciplinary boundaries in order to develop new perspectives and insights into social relationships and relationships between people and organizations.

Human Relations welcomes critical reviews and essays:
- Critical reviews advance a field through new theory, new methods, a novel synthesis of extant evidence, or a combination of two or three of these elements. Reviews that identify new research questions and that make links between management and organizations and the wider social sciences are particularly welcome. Surveys or overviews of a field are unlikely to meet these criteria.
- Critical essays address contemporary scholarly issues and debates within the journal's scope. They are more controversial than conventional papers or reviews, and can be shorter. They argue a point of view, but must meet standards of academic rigour. Anyone with an idea for a critical essay is particularly encouraged to discuss it at an early stage with the Editor-in-Chief.

Human Relations encourages research that relates social theory to social practice and translates knowledge about human relations into prospects for social action and policy-making that aims to improve working lives.

Human Relations encourages the uses of methods that are appropriate to both the research context and research questions and therefore welcomes both qualitative and quantitative methods and innovative methods of investigation and analysis.

For a detailed set of Instructions to Authors and information on the online manuscript submission system, please visit: