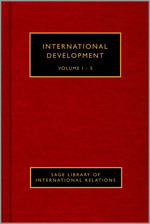 Share
Series:
SAGE Library of International Relations
Other Titles in:
International Development | Political Institutions (General)
January 2010 | 1 552 pages | SAGE Publications Ltd
Download flyer
This collection of four volumes traces the evolution and contemporary state of International Development through the articles that have defined the field and its history. The selection reveals the elements of continuity and change in this evolution and emphasizes the dynamic interplay between intellectual theoretical advances, political developments and development practice.

Volume I takes President Truman's inaugural speech of 1948 as the starting point of the era of 'international development' and examines the theoretical background to this speech as well as the theories of 'modernization' that came in its wake. Volume II looks at the radical critique of modernization theory in the 1960s and early 1970s.

Volume III traces the movement of the debates in the 1980s and 1990s from structural adjustment to the focus on 'good governance'. Volume IV focuses on the most recent development critiques, including post-colonial studies, and the theories of post-development and social movements.