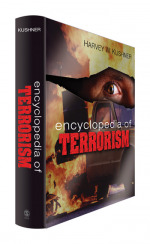 Share
Other Titles in:
International Relations (General) | Terrorism
January 2003 | 552 pages | SAGE Publications, Inc
Download flyer
`This outstanding work on terrorism accomplishes something what no other book has. The Encyclopedia of Terrorism is not only comprehensive, but accessible and brilliantly organized. It is the most important reference piece available, on the most compelling topic of our times, written by the foremost no-nonsense expert in the business. A must read' - Professor Brian Levin, Director, Center for the Study of Hate and Extremism, California State University, San Bernardino The Encyclopedia of Terrorism presents authoritative coverage of what is currently one of the world's most important topics. With more than 300 articles, the encyclopedia provides detailed discussions of who, what, where, when, and why of terrorism.

Up to date and timely, the articles cover such topics as Al-Qaeda, biological terrorism, extremism, Saddam Hussein, Jihad, Zacarias Moussaoui, and suicide bombers. Written and presented in a concise, readable format with detailed chronology, photographs, maps, and charts, the encyclopedia will be an essential reference for anyone interested in this critical field.

Its in-depth articles make the encyclopedia the most comprehensive reference source available in the field. It has an extensive and global coverage of groups (such as the IRA), and key events (including September 11). With details on the people, terms, statistics, and information on the biographical, historical, and geographical information that is concerned with the study of terrorism. It contains cross-references to related entries at the end of each article with suggested further reading lists in each area.

An internationally recognised expert on terrorism, Harvey Kushner has studied terrorism for more than three decades. He serves as a consultant on terrorism for an array of US governmental and private agencies. In addition, his commentary appears regularly on the media news networks worldwide. His expertise in this field has ensured that the entries, including contributions by other authorities in the field, are of the highest quality.

Kushner (chair, criminal justice, Long Island Univ.), a noted terrorism expert and frequent guest on CNN, CNBC, and Fox News, here provides the most comprehensive and up-to-date work available on this subject. Begun a year before the 9/11 disaster, this guide presents more than 300 article-length entries, arranged alphabetically and covering such topics as terrorist groups, key terrorists, types of terrorism, and terrorist events (including 9/11). The work begins with an alphabetical list of entries, which are then categorized into 32 general topics in a handy reader’s guide. In the entries themselves, Kushner (along with a number of expert contributors) provides a solid, powerful collection of timely data on the who, what, where, when, and why of international terrorism. Each entry contains many cross references and a detailed list of suggested further readings, augmented by a large bibliography. The text is further enhanced by the addition of photographs and world maps highlighted with terror sites. Beyond its ample information on the Middle East, the book ranges worldwide to include profiles of animal rights activists, anti-abortion activists, and white supremacists. Finally, Kushner adds a useful chronological listing of key terrorist activities, beginning with the 1865 formation of the KKK and ending with the October 12, 2002 bombing in Bali. Kushner’s work easily updates Alex P. Schmid’s Political Terrorism, although Schmid’s bibliography is larger (but now dated), and greatly expands Harry Henderson’s Library in a Book: Terrorism. Essential for all academic and larger public libraries.

“Thoroughly researched and corroborated, Kushner’s book is an excellent addition to the many books published since September 11. Highly recommended.”

“Kushner has gathered the type of information for which teen researchers are clamoring: biographies of key individuals, the histories of various terrorist groups both foreign and domestic, and a full discussion of specific incidents. . . . This work is ideal for libraries looking for a one-volume reference on this timely topic.”

“It is rare to find a reference volume both as timely and as well done as this effort. Considering the importance of its subject, its global and historical coverage, and its value to researchers, students, the general reader, and law enforcement, this book is a must for every library.”

"From antiabortion and animal rights groups to separatist movements and white supremacist groups, Kushner explains the origins, motivations and activities of terrorist organizations. . . . While by no means exhaustive, Kushner's guide will provide an excellent starting point for students and is far superior to much that was rushed into print in the wake of 9/11. This title is suitable for high school, public and academic libraries. "

The Future of Terrorism