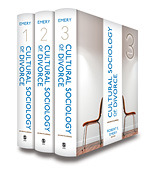 Share
Other Titles in:
Couples, Marriage & Family Counselling | Dysfunctional Families | Sociology of the Family
April 2013 | 1 624 pages | SAGE Publications, Inc
Download flyer
While the formal definition of divorce may be concise and straightforward (legal termination of a marital union, dissolving bonds of matrimony between parties), the effects are anything but, particularly when children are involved. The Americans for Divorce Reform estimates that "40 or possibly even 50 percent of marriages will end in divorce if current trends continue." Outside the U.S., divorce rates have markedly increased across developed countries. Divorce and its effects are a significant social factor in our culture and others. It might be said that a whole "divorce industry" has been constructed, with divorce lawyers and mediators, family counselors, support groups, etc. As King Henry VIII's divorces showed, divorce has not always been easy or accepted. In some countries, divorce is not permitted and even in Europe, countries such as Spain, Italy, Portugal, and the Republic of Ireland legalized divorce only in the latter quarter of the 20th century. This multi-disciplinary encyclopedia covers curricular subjects related to divorce as examined by disciplines ranging from marriage and the family to anthropology, social and legal history, developmental and clinical psychology, and religion, all through a lens of cultural sociology.

All in all it's a broad mix of topics in a work ideally suited to those doing further research. Journalists preparing articles for publication in specialist magazines, or students of such topics as family law, family therapy and counselling will appreciate its detail.

"This detailed, multidisciplinary, three-volume reference set features some 550 signed entries and deserves to be in every academic library. Covering every nation, this reference work shows the various ways divorce is handled...Just reading this set's interesting chronology of divorce likely will be enough to make researchers want to delve in....this reference source will appeal to students and researchers in a wide range of fields....Summing Up: Recommended. Lower-division undergraduates and above; general readers."

"...Cultural Sociology of Divorce: An Encyclopedia is a timely and useful resource, especially as the number of countries permitting divorce increases. The encyclopedia provides depth and breadth and an insight to how divorce changes the cultural landscape of society. Its wide scope makes it interesting to browse through, as well as serving as a valuable tool for high school and undergraduate students doing research in this area. In short, this encyclopedia is well suited for high school, undergraduate, and public libraries."