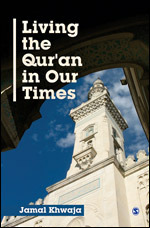 Share
Other Titles in:
Philosophy (General) | Philosophy of Religion | Religion (General)
December 2012 | 240 pages | SAGE India
Download flyer
In a world where powerful lobbies are vilifying the Qur'an as the underlying cause of conflicts-conflicts that are actually rooted in greed and the self-serving secular politics of oil, occupation and social injustice-how can non-Muslims discover the authentic teachings of the Qur'an? How can they work with Muslims to overcome mutual suspicions, stereotyping, and self-serving propaganda? A starting point is would be to recognize that Muslims worldwide are engaged in diverse and robust internal debates.

While it is an integral part of the Islamic faith that the Qur'an is the infallible "Word of God," the plain fact is that there is significant disagreement among the faithful over what the revealed texts mean or imply on a host of issues. In Living the Qur'an in Our Times, the author combines theological insight and philosophical erudition to delve into the semantics of the Qur'an and its vision. This work explains why traditional religion has failed to respond adequately to challenges posed by modernity. It strives to recognize the intimate connection between a Muslim's struggle to live the Qur'an authentically and the many ethical and moral dilemmas one faces daily in one's life.

Enlightening for all those who are unfamiliar with Islamic history and the Qur'an, this book explores foundational Islamic principles that emphasize mutual respect and cooperation among all people, thus helping cultivate a vibrant Islamic identity in today's interdependent, multicultural global environment.

Viewing current-day concerns through the lens of creative fidelity, Khwaja has refreshing perspectives to offer…to all those interested in the subject of Islam and modernity, Khwaja has much to offer.

A book of divine revelation...[The book] is an excellent starting point, not that it would teach you all about the Qur’an, but it will certainly teach you the way to read it. It would give you the courage to form your own understanding of the holy book.