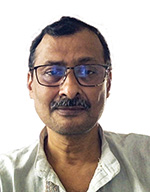 V. Ramaswamy took up literary translation of subaltern writing after almost two decades of social and grassroot activism in his city, Kolkata, for and with the labouring poor. He has translated The Golden Gandhi Statue from America: Early Stories, Wild Animals Prohibited: Stories / Anti-stories, and This Could Have Become Ramayan Chamar’s Tale: Two Anti-Novels, by Subimal Misra, and the novel The Runaway Boy, by Manoranjan Byapari. He was awarded the inaugural Literature Across Frontiers – Charles Wallace India Trust fellowship in 2016.
Memories of Arrival