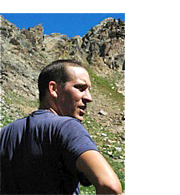 Kevin Wehr is Assistant Professor in the Department of Sociology at the California State University, Sacramento, where he specializes in Environmental Sociology, Political Sociology, Social Theory, Culture, and Criminology. He received his Ph.D. in Sociology in 2002 and his MS in 1998 from the University of Wisconsin, Madison. He received his BA in 1994 from the University of California, Santa Cruz.  Selected publications include The Sociology of Bicycle Messengers: The last uncoopted punk rock subculture, forthcoming in 2009 from University Press of America, and America’s Fight Over Water: The environmental and political consequences of large-scale dams in the American West published with Routledge Press in 2004, and “Dairy Industrialization in the First Place: Urbanization, Immigration, and Political Economy in Los Angeles County, 1920-1970” (co-authored with Jess Gilbert) published in Rural Sociology. 68(4): 467-90 in 2003. His on-going research projects include a quasi-experimental study of pricing mechanisms and conservation behavior during the installation of water meters in Sacramento, California, a quasi-experimental study of High School discipline and entry into the criminal justice system, and an international comparison of water infrastructure development in China, Chile, India, and the US.
Green Culture