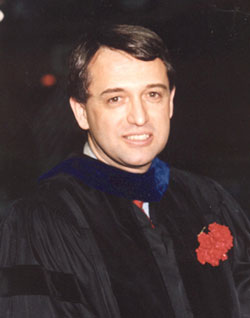 James M. O’Neil, Ph.D. is Professor of Educational Psychology and Family Studies Psychology at the University of Connecticut and a licensed psychologist in private practice in South Windsor, Connecticut. In 1975, he received his doctorate from the Department of Counseling and Personnel Services at the University of Maryland. He is a fellow of the American Psychological Association in Divisions 17, 35, 43, 51, 52, 56. He is one of the founding members of the Society for the Psychological Study of Men and Masculinity (SPSMM), Division 51 of the American Psychological Association. SPSMM named him Researcher of the Year in 1997 for his 20-year research program on men’s gender role conflict. His research programs relate to men and masculinity, gender role conflict, psychology of men and women, forgiveness, violence, and victimization. He is the author of the Gender Role Conflict Scale, a widely used measure of men’s conflict with their gender roles. His last book (with Michele Harway) was What Causes Men’s Violence Against Women? (Sage, 1999). In 1991, he was awarded a Fulbright Teaching Scholarship by the Council for International Exchange of Scholars, to lecture in the former Soviet Union. He lectured at Moscow State Pedagogical University from February through April, 1992, on such topics as psychological counseling, psychology of gender roles, and victimization. In 1995, he was awarded Teaching Fellow status by the University of Connecticut for his outstanding excellence and dedication to the university teaching profession. In 2008, he received the Distinguished Professional Service Award from the Society for the Psychological Study of Men and Masculinity of APA for his significant contributions at the local, state, and national levels in promoting men’s well-being. His summary of over 200 empirical studies on men’s gender role conflict (O’Neil, 2008) resulted in being awarded The 2009 Counseling Psychologist Outstanding Contribution Award from Division 17 (Counseling Psychology). In the same year he was inducted into Athletic Hall of Fame of Marathon Central School Hall in a ceremony in his hometown of Marathon, New York.
What Causes Men's Violence Against Women?