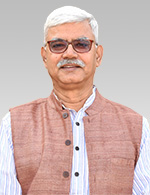 Bidyut Chakrabarty is Vice-Chancellor of Visva-Bharati, West Bengal. He was a professor in the Department of Political Science, University of Delhi, until November 2018. He completed his PhD from London School of Economics and has been associated with teaching and research for more than three decades. He has taught in several prestigious educational institutions, such as the London School of Economics; Indian Institute of Management Calcutta; Monash University, Australia; National University of Singapore; and Hamburg University, Germany. He has authored several textbooks and academic books. Among his publications are Public Administration: From Government to Governance (2017), Winning the Mandate: The Indian Experience (2016, SAGE Publications), Communism in India: Events, Processes and Ideologies (2014), Indian Politics and Society since Independence: Events, Processes and Ideology (2008) and The Governance Discourse: A Reader (2008).