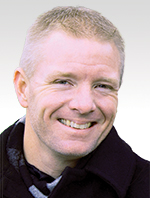 Ben Gilpin is the principal at Warner Elementary in the Western School District. Warner Elementary is located in Spring Arbor, Michigan. He is a student-centered educator that is focused on collaboration, teamwork, student engagement and leadership.

Ben is all about the Whole Child; he cares deeply about all of his students and he always tries to foster caring and impactful relationships. Ben began his career teaching 5th grade. After nine years in the classroom he accepted a position as principal in the Western School District.

He has taken an active role in sharing his school's story. He understands the importance of spreading a positive message to the entire community.

Ben is viewed as an innovative leader throughout Jackson County and the State of Michigan.  Ben was recently named one of the Top 100 Influential Voices of 2014 by Bam Radio.  He has also presented and consulted on numerous educational topics. Most recently Ben led sessions on Twitter, Professional Blogging, Personalized Learning, and Redesigning Learning Spaces.

Ben earned his Elementary Education degree from Tri-State University, his Masters in Education from Spring Arbor University and his Educational Leadership Certificate from Eastern Michigan University. To learn more about Ben’s work, visit: http://colorfulprincipal.blogspot.com, or www.BenGilpin.com or connect with Ben on Twitter at @benjamingilpin.