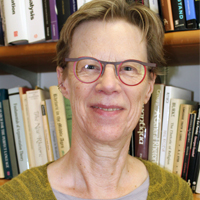 Barbara Johnstone is on the faculty of the Rhetoric Program at Carnegie Mellon University, where she teaches courses in discourse analysis, sociolinguistics, style, and research methods. She is currently Editor of the journal Language in Society, and I am working on a project about the enregisterment of dialect in Pittsburgh. Professor Johnstone is interested in the connections between discourse and place and in the role of the individual in language and linguistic theory.

Barbara Johnstone's previous work has been in these areas:

Rhetoric, history and theory: Persuasive talk; cross-cultural study of persuasive styles in the U.S. and the Middle East.
The SAGE Handbook of Sociolinguistics