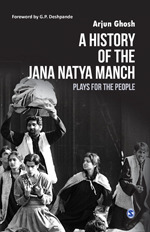 Beginning in the early 1970s, when a group of young students in Delhi sought to continue the legacy of the Indian Peoples' Theatre Association, the book takes a close but critical look at the various phases in the four decades of the theatre collective. The author has also captured within these pages the functioning of Janam as an organization, its methods of attracting and training fresh talent, the process of scripting, interactions with mass organizations, the experience of performing almost skin-to-skin with its spectators in the grime of Indian streets, and much more.

This book is not only a narration of Janam's history, development and functioning, it is also an attempt to throw fresh light on the practice of theater.