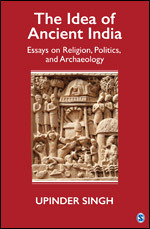 This book engages with some of the most important issues, debates, and methodologies in the writing of ancient Indian history.

Thematically structured, the first section discusses religious and regional processes through a meticulous analysis of inscriptions and material remains. The second—based extensively on archival sources—connects ancient and modern India through a discussion of the beginnings of Indian archaeology and the discovery, interpretation, and reinvention of ancient sites in colonial and post-colonial times. The third underlines the importance of reconstructing the intellectual landscape of ancient India through a sensitive, yet, critical historicization of political ideas in texts and inscriptions. The final section makes a strong case for situating ancient India within a broader,  Asian, frame.

Introduction
I. Religion and Region
Sanchi: The History of the Patronage of an Ancient Buddhist Establishment
Nagarjunakonda: Buddhism in the ‘City of Victory’
Cults and Shrines in Early Historical Mathura (c. 200 BC to AD 200)
Early Medieval Orissa: The Data and the Debate
II. Archaeologists and the Modern Histories of Ancient Sites
Archaeologists and Architectural Scholars in 19th-Century India
Amaravati: The Dismembering of the Mahacaitya (1797–1886)
Buddhism, Archaeology, and the Nation: Nagarjunakonda (1926–2006)
Exile and Return: The Reinvention of Buddhism and Buddhist Sites in Modern India
III. The Intersection of Political Ideas and Practice
Governing the State and the Self: Political Philosophy and Practice in the Edicts of Asoka
Politics, Violence, and War in Kamandaka’s Nitisara
The Power of a Poet: Kingship, Empire, and War in Kalidasa’s Raghuva?sa
IV. Looking beyond India to Asia
Gifts from Other Lands: Southeast Asian Religious Endowments in India
Politics, Piety, and Patronage: The Burmese Engagement with Bodhgaya
Index

This book, as a whole, has an interesting trajectory…singh’s clarity regarding the extent and limits of what her source materials can reveal to her remains unclouded…this is a collection of essays where material remains and textual sources come together to create a plausible historical narrative in which we are not missing the forests for the trees.

An important contribution to studies on Indian history, with some essays in the collection revisiting old themes and sources and others focusing on new sources and themes of inquiry… Upinder Singh’s latest publication is essentially such a collection of diverse articles written at different points of time, covering disparate sources and historical contexts.

Along with temporal flexibility, singh at the end of the book, gives us her view that in order to provide a more complete way of understanding India’s past there is a necessity of expanding our spatial horizon. In other words, her conviction is that linking India to the wider networks and connections of the history of Asia is a must,