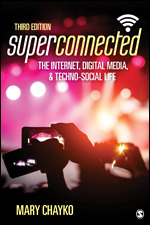 What does it mean to live in a superconnected society?

In this new revised, updated edition of Superconnected: The Internet, Digital Media, and Techno-Social Life, Mary Chayko continues to explore how social life is impacted when communication and information technology enters the picture. She provides timely analysis of such critical issues as privacy and surveillance, online harassment and abuse, and dependency and addiction, while examining new trends in social media use, global inequalities and divides, online relating and dating, and the internet of things. The new edition highlights such issues as technology and mental health, digital public policy and law, and the author’s own research on bias and stereotyping in digital environments. Throughout, she considers how individuals, families, communities, organizations, and whole societies are affected. The author’s clear, nontechnical discussions and interdisciplinary synthesis make the third edition of Superconnected an essential text for any course that explores how contemporary life is impacted by the internet, social media, mobile devices, and smart technologies.

The text is accompanied by the author's Superconnected Blog (superconnectedblog.com) which includes lecture slides, discussion questions and assignments, and short podcasts for each chapter that summarize key ideas.

Don′t let anybody tell you otherwise. From kids to seniors, we are the greatest generations: communicating, networking, and creating information and media constantly and collaboratively. In this lively, wide-ranging book, Mary Chayko tells you how and why we are the most superconnected society ever.

Dr. Mary Chayko provides a splendid tour of how social media came to be, what they are used for today, and what they are doing for and to us. Clearly written, Superconnected makes a fine introduction to the subject for students and general readers alike.

Mary Chayko has crafted a most remarkable work in Superconnected. Rarely have I seen a writer at such ease in identifying and explaining both the essential techno-social building blocks of information and communication technologies and the rich, fascinating behaviors associated with them. Sharing and surveillance, emotion and presence, hacking and activism, crowdsourcing and accountability, friending and dating, multitasking and stress -- these are just a few of Chayko’s inspired and informed topics. The work of a topnotch scholar and master teacher, Superconnected is inviting and compelling, friendly and challenging, unique and vital. It is the book I have been waiting for -- perfect for any undergraduate class on information and communication technologies

Superconnected is a provocative, thoughtful and thorough examination of the contemporary digital state of affairs. It will educate, provoke and inspire readers to form new perspectives on the consequences of new media in everyday life.

Mary Chayko′s Superconnected is an indispensable, interdisciplinary guide to the complexities of life in the digital age. Engagingly written and masterfully covering a wide range of essential and nuanced topics, it is a unique text that is ideal for any reader who wants to know how our current techno-social condition emerged and the promises and pitfalls of living in it. An outstanding text that deserves to be adopted across the disciplines.

Evan Selinger, Professor of Philosophy, Rochester Institute of Technology, and author (with Brett Frischmann) of the forthcoming Being Human in the 21st Century

In Superconnected, Mary Chayko gives the reader a grand tour of the digital world. From history to hypertext, from the web to wireless, from cognition to community, from proxemics to participation to power, from the self to sharing to surveillance, from romance to rights and from group to globalization...it is all here to be enjoyed in her insightful work.

Superconnected is captivating in its approach as it dispels old myths and provides new insights into the functioning of a digital society. No other text provides such in-depth and thought-provoking coverage of such a wide range of issues, weaving together theory and on-the-ground examples, and local and global understandings, of how the internet and digital media/technologies have radically transformed many aspects of modern life

Anabel Quan-Haase, Associate Professor of Sociology and Information and Media Studies, University of Western Ontario, and author, Technology and Society

Writing in a clear and lucid style, Mary Chayko explores the impact of internet and digital media on many aspects of our lives, examining issues ranging from friending and liking to surveillance and global inequalities.  The book is highly readable, an ideal text for undergraduate students as well as the general public who are interested in such topics.

The text has been updated throughout, with 75 new research citations.

Updated statistics for global internet use, number of social media users, percentage of world that has electricity, and text relevant to these issues.

Updated/changed examples of mediated platforms throughout (i.e. from Facebook to Instagram), along with relevant aspects of platforms.

Gender has been highlighted as an example in discussion of binary categorization.

Highlights more broadly and deeply the reality of the digital world and the enmeshment of the online and offline,  and includes added text and examples to this effect.

Shifted “bitcoin” to lower case (and throughout book) and included new material on cryptocurrency and the impact of social media “bots” on elections.

New section on bias and stereotyping in social media and search engines.

New and updated material regarding “cyberspace,” “cyberasocial,” networked individualism, the strength of weak ties, the symbolic representations of groups, metaphors, platforms, memes, and the mental transportedness of media users to similarly envisioned environments,

New and updated material regarding global internet use, including patterns of use in less-developed societies, activism and social change.

The section called "Health and Moods" has been re-named "Health, Including Mental Health, and Moods," and now contains new material on mental health effects and “digital detoxing”

New and updated material regarding families and media use, including parents’ and grandparents’ use of social media with children; e-health and health apps; digital religiosity; remote learning (including in an era of emergencies and pandemic), digital work and e-commerce; politics; media conglomerates and experiential news.

Summary of changes: Inclusion of new and updated material regarding constant availability, stress and depression (including in children), internet dependency and social impacts of technology

New and updated material regarding wearable technologies, smart cities, robotics, bots and digital propaganda, the internet of things, artificial intelligence, virtual reality and other new and emerging digital technologies with an emphasis on forthcoming problems and concerns.