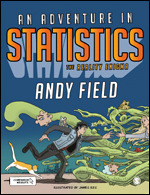 An Adventure in Statistics: The Reality Enigma by best-selling author and award-winning teacher Andy Field offers a better way to learn statistics. It combines rock-solid statistics coverage with compelling visual story-telling to address the conceptual difficulties that students learning statistics for the first time often encounter in introductory courses - guiding students away from rote memorization and toward critical thinking and problem solving. Field masterfully weaves in a unique, action-packed story starring Zach, a character who thinks like a student, processing information, and the challenges of understanding it, in the same way a statistics novice would. Illustrated with stunning graphic novel-style art and featuring Socratic dialogue, the story captivates readers as it introduces them to concepts, eliminating potential statistics anxiety.

In doing so, it provides an unrivalled launch pad to further study, research, and inquisitiveness about the real world, equipping students with the skills to succeed in their chosen degree and which they can go on to apply in the workplace.

The Story and Main Characters

In the City of Elpis, in the year 2100, there has been a reality revolution. Prior to the revolution, Elpis citizens were unable to see their flaws and limitations, believing themselves talented and special. This led to a self-absorbed society in which hard work and the collective good were undervalued and eroded.

To combat this, Professor Milton Grey invented the reality prism, a hat that allowed its wearers to see themselves as they really were - flaws and all. Faced with the truth, Elpis citizens revolted and destroyed and banned all reality prisms.

Zach and Alice are born soon after all the prisms have been destroyed. Zach, a musician who doesn’t understand science, and Alice, a geneticist who is also a whiz at statistics, are in love. One night, after making a world-changing discovery, Alice suddenly disappears, leaving behind a song playing on a loop and a file with her research on it.

Statistics to the Rescue!

Sensing that she might be in danger, Zach follows the clues to find her, as he realizes that the key to discovering why Alice has vanished is in her research. Alas! He must learn statistics and apply what he learns in order to overcome a number of deadly challenges and find the love of his life.

As Zach and his pocket watch, The Head, embark on their quest to find Alice, they meet Professor Milton Grey and Celia, battle zombies, cross a probability bridge, and encounter Jig:Saw, a mysterious corporation that might have something to do with Alice’s disappearance…

Designed to enhance each student’s learning experience, SAGE edge features carefully crafted tools and resources that encourage review, practice, and critical thinking to give students the edge they need to master course content. It also gives instructors access to course management solutions that save time and make teaching easier.

A great read for everybody, not just beginners. Exciting and captivating, and inspiring to read on and understand.

This is the best graphic novel based statistics text available.

This book is truly outstanding!!! Perfect read, easy to understand, and above all - really fun!! Andy Shield is a genius and a great novelist as well! This book is even more than I was looking for!!!

This text is indeed an adventure in statistics. Unlike any statistical text I have ever used. By creating a background storyline, Field, makes concepts much easier to grasp. I have not just recommended it to all Postgraduate students who describe themselves as more qualitative in their approach,but also to others who need a review of statistical concepts that will capture their imagination. Highly recommended it.

This book is accessible and easy to read for students in their research training. The storyline and cartoons make difficult concepts easy to grasp.

Another great book from Andy Fields, making statistics understandable by giving context to the examples

Reading about statistics was never this exciting. I'm afraid some of the students will not appreciate it since it deviates too much from the standard textbook style so I wouldn't use it as the main course book. However, I'm definitely going to suggest it as an alternative to those who find the regular statistics textbooks too dry. It's also excellent reading for nerdy cat-lover types such as myself.

An essential read for students undertaking quantitative research for their projects. The book outlines information in an easy accessible manner and students enjoy the layout and format so that they can familiarise themselves with the approach they have chosen. Very comprehensive book.

An Introduction to Statistics

A Guide to R for Social and Behavioral Science Statistics

An R Companion for Applied Statistics I

A Crash Course in Statistics

Statistics for Research in Psychology

Textbook of Parametric and Nonparametric Statistics

Fundamental Statistics for the Social and Behavioral Sciences