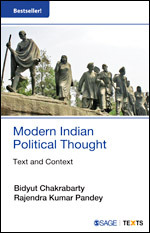 Share
Other Titles in:
History (General) | Political Theory & Thought (General) | South Asia Studies
October 2009 | 472 pages | SAGE Texts
Download flyer
Modern Indian Political Thought: Text and Context is an essential reading for students of social sciences seeking to unravel the formation and text of the thoughts of great Indian political thinkers. It is an unconventional articulation of the political thought in India that evolved during the nationalist struggle against colonialism.

The salient features of the book are:

- In contrast to the existing literature on the subject, it carries a context-driven conceptualisation of the major strands of political thought that emerged in India in the past two centuries. It focuses on India's peculiar socio-political processes under colonialism that influenced the evolution of such thought.

- Incorporates new ideas and issues that have been articulated, though not as extensively, in contemporary works on Indian nationalist thought and movement.

- Discusses the development and articulation of political thought by leaders like Gandhi, Tagore, Ambedkar, JP, Nehru and Lohia.

The distinguishing feature of this book is its linking of the text of Indian political thought with the context. In doing so, it challenges the ethno-centric interpretation of nationalism that, despite its roots in Western Enlightenment, evolved differently because of the context in which it was articulated.