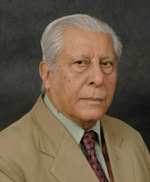 Jamal Khwaja was born in Delhi in 1928. After doing his M.A. in Philosophy from the Aligarh Muslim University, India, he obtained an Honors degree from Christ’s College Cambridge, UK. Later he spent a year studying the German language and European existentialism at Munster University, Germany. At Cambridge he was deeply influenced by the work of C.D. Broad, Wittgenstein, and John Wisdom, apart from his college tutor, I.T. Ramsey who later became Professor of Christian Religion at Oxford. It was the latter’s influence, which, taught Khwaja to appreciate the inner beauty and power of pure spirituality. Khwaja was thus led to appreciate the value of linguistic analysis as a tool of philosophical inquiry and to combine the quest for clarity with the insights and depth of the existentialist approach to religion and spirituality.

Khwaja was appointed Lecturer in Philosophy at the Aligarh Muslim University in 1953. Before he could begin serious academic work in his chosen field, his family tradition of public work pulled him into a brief spell of active politics under the charismatic Jawahar Lal Nehru, the first Prime Minister of India. Nehru was keen to rejuvenate his team of colleagues through inducting fresh blood into the Indian National Congress. He included young Khwaja, then freshly returned from Cambridge, along with four or five other young persons. Khwaja thus became one of the youngest entrants into the Indian Parliament as a member of the Lok Sabha (Lower House) from 1957 to 1962. While in the corridors of power he learned to distinguish between ideals and illusions, and finally chose to pursue the path of knowledge rather than the path of acquiring authority or power. Returning to his alma mater in 1962, he resumed teaching and research in the philosophy of religion. Ever since then Khwaja has lived a quiet life in Aligarh. He was Dean of the Faculty of Arts and was a member of important committees of the University Grants Commission and the Indian Council for Philosophical Research before retiring as Professor and Chairman of the Department of Philosophy in 1988. He was a frequent and active participant in national seminars held at the Indian Institute of Advanced Study, Shimla.

He was invited to deliver the Khuda Bakhsh Memorial Lecture in Patna. He was one of the official Indian delegates at the World Philosophical Congress, Brighton, UK, in 1988, and also at the International Islamic Conference Kuala Lumpur, Malaysia, in 1967, and the Pakistan International Philosophy Congress, Peshawar, Pakistan, in 1964.

Living the Qur'an in Our Times