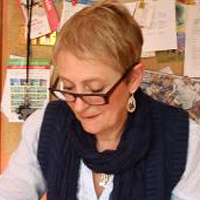 Ann Clare began her career as a secondary school English teacher. It was after having her three children, Felicity, Edward and Hannah,  that she became the head of a small village private nursery school at the same time as studying for her Master’s degree. Ann followed this by becoming an Early Years Consultant working for two North West local authorities.

A chance conversation with Professor Cathy Nutbrown encouraged her to further her studies at the University of Sheffield where she graduated with her PhD, researching babies and young children under three.

The arrival of Ann’s two grandchildren, Oscar and Lottie, further inspired her to write this new book focusing on interaction and communication in the early years. Ann is now enjoying a happy retirement which is filled with her continued work with the University of Sheffield, making bread and visiting her gorgeous grandchildren in Germany.

Interested in Talking With Children and Quality Interactions? This free Web Summit, taking place Monday 12th September is for you! http://www.earlyyearssummit.com/?ref=Ann