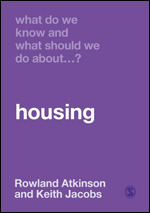 Share
Series:
What Do We Know and What Should We Do About:
Other Titles in:
British Government and Politics | Cultural Studies (General) | Sociology (General)
February 2020 | 88 pages | SAGE Publications Ltd
Download flyer Recommend to Library
The current state of housing in the UK is in crisis, with house-prices and rents spiralling out of control, squalor in the private rented sector, a severe shortage of new affordable homes, overcrowding, and rising mortgage debts. But what caused the crisis and what can we do about it?

In this book, established housing policy experts Rowland Atkinson and Keith Jacobs claim what we think we know about the housing crisis is wrong, and encourage readers to see the crisis as a result of the ‘property machine’ - a constellation of interests, made up of banks and developers, landlords, investors, homeowners and real estate agencies. The authors analyse the key social and economic forces that have shaped Britain’s housing crisis, exposing the roots of current problems such as rising homelessness, the lack of affordable housing, and insecurity in the private rental sector, before linking them to the choices made by successive governments to prioritise the interests of capital and the 'property machine' above social need. The authors conclude with innovative proposals to help alleviate the crisis, improve housing conditions and tackle the inequalities expressed in relation to personal housing wealth. Allowing for the establishment of a fairer, more equal society and a more stable economic future.

ABOUT THE SERIES: The ‘What Do We Know and What Should We Do About...?' series offers readers short, up-to-date overviews of key issues often misrepresented or simplified in the mainstream media. Each book is written by a leading social scientist with an established reputation in the relevant subject area. The Series Editor is Professor Chris Grey, Royal Holloway, University of London

Chapter 1: Introduction
Chapter 2: The Background
Chapter 3: What do we know?
Chapter 4: What should we do?
Chapter 5: Conclusion: ideology and inaction

What Do We Know and What Should We Do About Inequality?

What Do We Know and What Should We Do About Immigration?

What Do We Know and What Should We Do About Internet Privacy?
Show More Show Less